Hebhomes have successfully completed the erection to wind and weathertight of a AGH301 Airigh in the Caribbean. With two Force 5 hurricanes skirting to the north of Grenada the team from the Uists were thankful that the weather only briefly disrupted their progress.

The story has been picked up by the local press.  This is how the adventure was reported in the Stornoway Gazette: 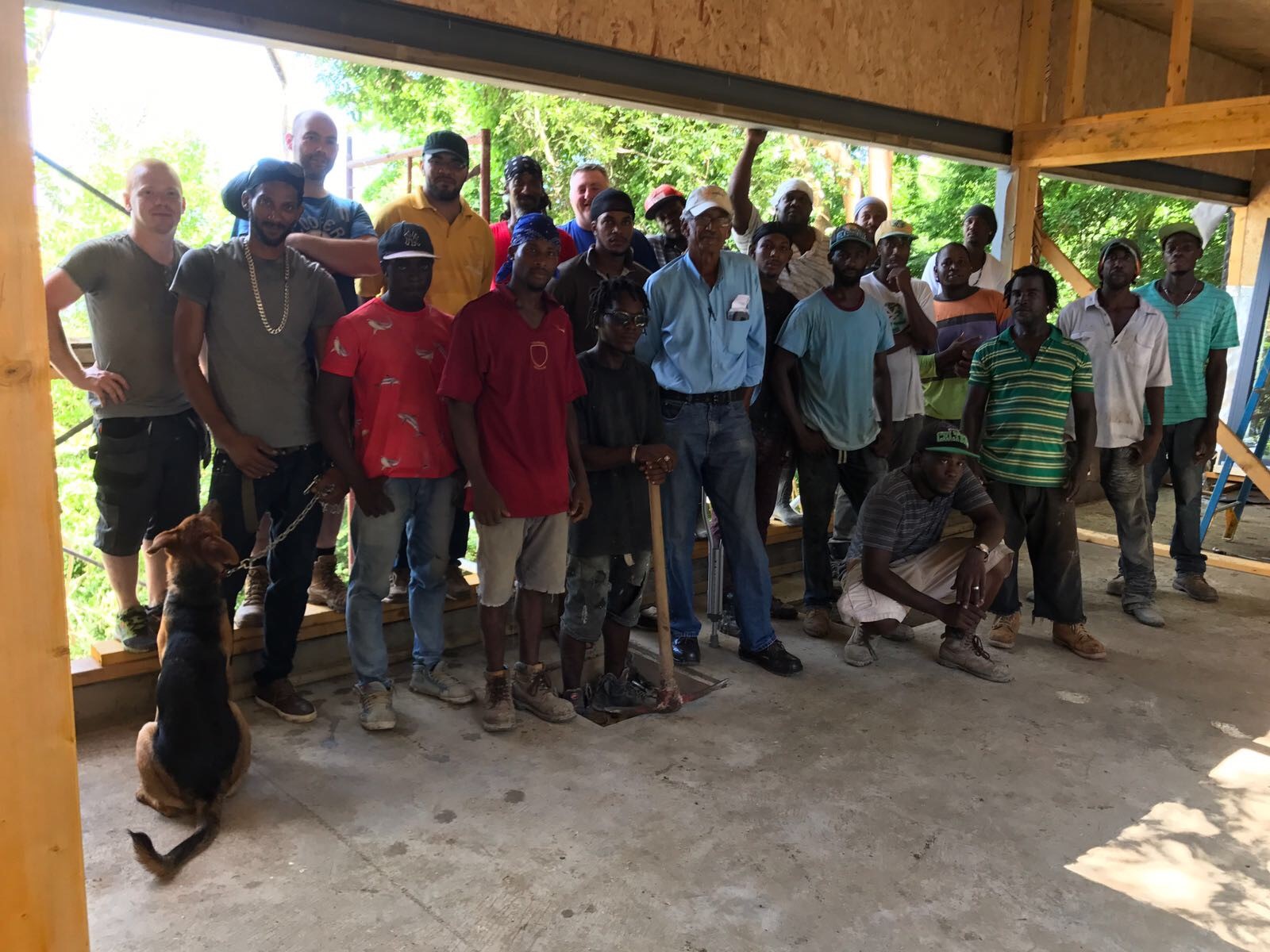 A â€‹team of builders from the Hebrides are blessing their good fortunes after narrowly missing the hurricanes that have caused devastation across the Caribbean. Frankie Wallis , Peter Maclean and Seamus Campbell â€‹(pictured above with local team of contractors)â€‹â€‹ â€‹who originally come from North and South Uist, are currently building an architect designed kit house â€‹supplied by Skye-based company HebHomes on one of the southern Caribbean islands of Grenada. Not far to the north, sustained winds of 185miles an hour have ripped through communities, causing catastrophic damage and loss of life. And according to Alasdair Stephen, a director of HebHomes, the events have made them realise how lucky they have been.

“When we heard about Hurricane Imra we were worried – our team had just arrived in the Caribbean a couple of days earlier to start erecting the kit. “While we are so thankful to hear that the guys in Grenada are safe â€‹ â€‹and did not receive the full brunt of the hurricane,â€‹ â€‹butâ€‹â€‹ â€‹our thoughts are with the people of the Caribbean and Florida who have been so badly affected by the storm.” The building is a one-bedroom dwelling with a design inspired by the Hebridean sheiling, or ‘â€‹airighâ€‹‘â€‹ in Gaelic. Although it may sound alien to the Caribbean, Alasdair says that it will fit in wellâ€‹:â€‹

“â€‹Like the Hebrides, the Caribbean has pure white beaches, coral and crystal blue water. And they also have a tradition of hut-like architecture which is not too dissimilar to our sheilings. We also have ferocious storms in the Hebrides, but nothing on the scale we are seeing out there. “Whenever we complain about our weather here we should remember that we are actually very fortunate.” â€‹The airigh is being constructed using structurally insulated panels and is being built with the help of local Grenada tradesman.

Additional steel has been engineered in to the structure to allow for the Hurricane force 5 winds. â€‹The house isâ€‹â€‹ â€‹due for completion next month.â€‹ â€‹Carriacou is a small island to the north of Grenada which is about half the size of Barra.